A quick summary of activities that have kept Saito-san and the Saito 8 Committee busy over recent weeks.

We've lost track of all the articles, interviews, and news clips in the national and local media – newspapers, magazines, TV and radio, as well as web – that have appeared or will soon appear. Some we are called about; others we only learn about later.

To summarize them: Wow! Amazing! And always: Minoru Saito is what disaster-shocked Japan especially needs now.

At the top of all this national exposure is the NHK music special that was filmed in mid October and airs tomorrow night. It's a 90-minute charity show starring a number of Japan's top singers, during which Saito-san is treated to a lively on-stage interview by a team of presenters. Images from the voyage will be shown.

If you have access to NHK, Japan's national public TV network, you can watch it here:

(Not in Japan? We know of one Saito Japanese expat friend who plans to view it with her husband on their cable -- on their cattle ranch in rural Texas.)

Saito-san was feted two Tuesdays ago at Tycoon Restaurant, where nearly 70 friends and supporters came to congratulate him. Among the several highlights of the evening:
Note:
We greatly appreciate their participation with the calls, which were tricky across so many time zones and with the tight party schedule. Each of these folks helped Saito-san during the voyage; in the case of Sir Robin, history's first non-stop solo circumnavigator, it was a chat between two long-time sailing pals. Our only disappointment was not being able to complete the call with Dave Cooper, who headed Team Hawaii and was instrumental in solving major problems over hundreds of volunteer man-hours, allowing Saito-san to safely depart Honolulu.

We'd once more like to express our deep appreciation to Nico Roehreke and our Supporting Sponsors and contributors for making Saito Challenge 8 possible. And to the members of the Saito 8 Support Committee, started here in Japan and eventually spread to the far corners of the world.

Several other parties are planned, including one being thrown in Saito's honor by his high school alumni association this evening. Yasuda Gakuen Alumni Association contributed funds and regularly updated its members on Saito-san's progress in its newsletter.

Nicole BMW Shuten-dohji III will spend a final week on the floating dock at Tycoon Restaurant in Yokohama, which has also been Saito-san's home most days since he arrived. (He's also been residing in Tokyo as the guest of an old friend, a Buddhist priest.) The generosity of Kota Fujiki and his staff during the now more than two months that NBSDIII has been there has been extraordinary, including not just the berth but also free food, and the use of the restaurant's amenities, including electrical power, security – and not least – a hot shower.

As attested to by the arrival pictures, NBSDIII was severely damaged during the voyage, both at Cape Horn and Punta Arenas in Chile, and through wear & tear on the arduous "wrong-way" east-west circumnavigation.

So this weekend, assisted by Saito 8 Safety Officer Mike Seymour, Simon Gougis, and Hisato Mori, Saito-san will move the vessel about 90 nm to Arari Shipbuilders, a marine facility owned and operated by Mori-san in a harbor on west Izu Peninsula. There she will be hauled out for bottom cleaning and inspection, and a decision will be made on whether to attempt a long list of repairs.

There's also hope to sell her, but that's a decision to be faced probably next spring. 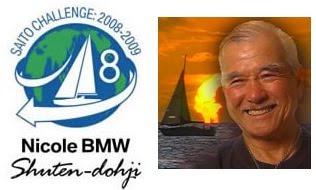 Going the "Wrong Way Around"

How You Can Donate